The ability to stay connected while traveling is one of the most important needs for working nomads, and a cellular booster is one of the more common signal enhancing devices people choose to improve their chances of getting a good connection.

In 2019 we saw several new boosters come to market, and put several of them through some extensive testing.

Here’s an overview of those new boosters and the testing we conducted. 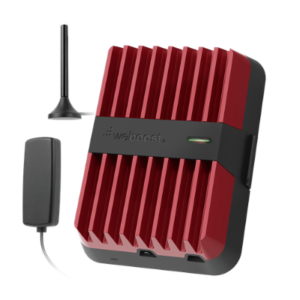 weBoost has long been a popular option in the cellular booster market and brought a new flagship model to market this year - the Drive Reach. Released on May 21, it replaced the tried-and-true Drive X (formerly Drive 4G-X.) weBoost describes the Drive Reach as their "most powerful, in-vehicle cell signal booster yet.” It’s twice as powerful as the Drive X, with 4.7 dBm more uplink power.

We put the Drive Reach through some extensive hands-on testing, and our results confirmed weBoost’s claims. In fact, when paired with our favorite 4G OTR Antenna (which is not available as an official kit) - it was the top performer in our extensive testing. The advantages of the Reach booster unit over the 4G-X when using the same antennas were clear in our testing.

Based on these results, the weBoost Drive Reach earned our Top Pick designation.

The Drive Reach, as of late 2019, comes in two kit variations - one for vehicles with the 4" Stubby external antenna and one designed for fleet vehicles that uses a fixed NMO-style antenna. Other antenna bundles are expected to be released in the future. 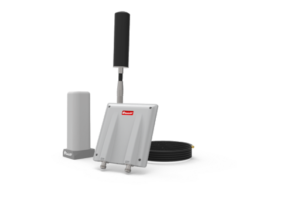 Released on June 20, the SolidRF RV Pro is a new and very unique mobile-rated booster designed for use in RVs. Most RV and vehicle booster kits utilize the same basic configuration, with an external antenna on the roof, and another antenna and booster located inside the vehicle.

And indoors, the SolidRF RV Pro is the first mobile cellular booster to provide for TWO interior antennas, allowing for two separate boosted areas with improved signal inside the RV.

In our testing, the SolidRF RV Pro was an average performer.

Its unique design does come with some installation constraints that may be a challenge for some RV installations. It also lacked a few features we would have liked to have seen, and the interface had a few bugs. These issues combined with average performance kept the SolidRF RV Pro from earning a Top Pick. But the form factor may be a winner for some. 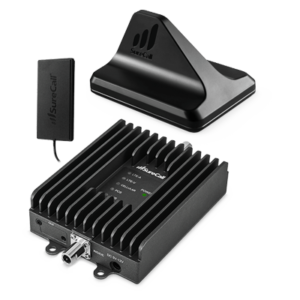 SureCall is an established company that has built a solid reputation in the booster market over the past several years. In September 2019 they released the Fusion2Go Max, claiming it would be "ushering in the next generation of signal booster technology through its ground-breaking ERT technology" - and saying that the Fusion2Go Max is "the most powerful vehicle signal booster in its class".

ERT stands for "Extended Range Technology" and its unique feature is that it places some of the booster electronics inside the outdoor antenna itself which SureCall says results in the elimination of signal loss from the cable run between the antenna and the booster core.

Though the technology is interesting, the Fusion2Go Max comes with some tradeoffs that will make it a challenge to use in many RV and marine installations. For one, the antenna wires are short, as the current production unit (as of late 2019) is designed for use in a car, where cable lengths can be much shorter.

But SureCall indicates they are planning to introduce other boosters with ERT in the future, and some of these will be designed specifically for other vehicle types, so hopefully this means that there will be versions focused on the RV and the marine markets as well.

This booster was released later in the year an only arrived in time to catch the end of our final testing round for 2019, which limited our ability to fully test its performance.  For the tests we were able to do, it performed consistently in the middle of the pack, but we weren't able to fully test the ERT technology, so more testing is warranted and planned for the future. 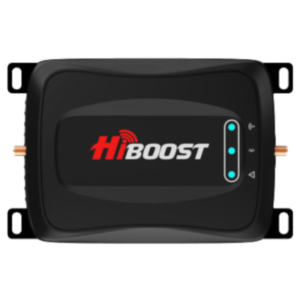 Initially available with a vehicle antenna kit, as of late 2019, an RV Kit is listed on their site as "coming soon." The main new feature of the Travel 4G 2.0 is a Wi-Fi and BlueTooth module to allow monitoring and booster configuration and adjustments via a mobile app, but not all the details are available as of this writing.

The technical specifications of the booster itself appear to be very similar to the previous model, which we considered a solid performer when used with their OTR Antenna sold separately.

This new booster was released too late in the year for any of our 2019 testing, but we may formally test this updated model in the future when the RV kit is available. 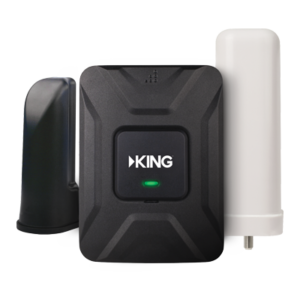 King is a company that has historically been focused on over-the-air TV technology, but in September 2019 they entered the mobile internet space with the introduction of the King Extend.

This King Extend kit is basically the weBoost 4G-X RV kit with King branding. weBoost retired the 4G-X in July 2019 and then licensed the kit to King.

While this kit was a solid performer when sold by weBoost, their new Drive Reach booster performs even better. Also, King increased the price by $50 over weBoost pricing. Given these two factors, it’s not a booster we particularly recommend.

More information on the King Extend:

We did two big rounds of booster testing this year, testing some of the new boosters listed above against the tried and true previous champion weBoost Drive 4G-X OTR.

The big news from our testing this year is that the weBoost Drive Reach displaced the weBoost 4G-X as our top-performing booster.

The weBoost 4G-X still performed very well and remains an option to consider, especially as it remains available in an official RV kit with our preferred 4G OTR Antenna.

Overall, none of the boosters performed particularly poorly, which is a good thing. Those shopping for a booster should consider all the relevant factors and may want to dig into the detailed notes from our testing rounds to get the complete performance picture. With so many booster options on the current market, performance alone isn't the only factor anymore.

Also - nothing so far changes our standard recommendation that in most cases, a MIMO antenna is still the best place to start for data devices with antenna ports.

More information on our 2019 booster testing:

MIA members have access to our complete testing data, analysis and conclusions, available in our lab.

So will current cellular boosters be useful in a 5G world?

Much of the magic of 5G technology relies on massive MIMO (multiple in, multiple out) antenna arrays, with as many as 16 (or eventually more) antennas on your device and the tower all tuned in to each other at once to enable absolutely tremendous speeds.

It is as if you were able to listen in on over a dozen conversations simultaneously in a crowded room.

But a cellular booster does away with the benefits of MIMO, and instead takes the signal from a single antenna and amplifies it.

Rather than a dozen conversations, you instead have just a single loud voice to pay attention to.

This fundamentally breaks with the way that 5G is being designed, and traditional cellular boosters (and external antennas) will be of little use for much of what is considered "5G".

But...  Don't forget that 5G is designed to interoperate and co-exist with 4G/LTE for years to come, and in some of the remote places where boosters are the most useful true 5G will be slow to deploy.

So even though LTE boosters will not help much with 5G signals, they will likely still play a role in a connectivity arsenal well into the 5G era.

For a lot more about MIMO, see our featured guide:

What About 5G Boosters?

As explained in the guide linked above - traditional boosters do not mesh well with MIMO, and since 5G relies so heavily upon MIMO it will likely take a radically different type of solution to extend cellular range in a 5G world.

And since mmWave and mid-band 5G signals are so poor at penetrating walls, there will inevitably be demand for better tools to bring a good signal from the outside to the inside of homes, cars, RVs, boats, and more.

To meet this demand - we expect there will eventually be repeaters that integrate a full 5G modem inside of a roof-mounted antenna dome. Then, via a separate indoor box, it will provide a signal for your local devices - perhaps over cellular, or perhaps even over Wi-Fi.

No such products like this have yet been announced, but we'll have our eyes out for innovative creative solutions like this in the years ahead.

Boosters are NOT the right choice for all applications

While boosters certainly have their place in a mobile internet arsenal, they are not the right choice in all situations. They make the most sense for devices without antenna ports (like smartphones and tablets), or when in weak signal areas. However, for devices with antenna ports in mild to moderate signal areas - a direct-connected antenna can outperform a booster. And boosters can actually DECREASE data speeds in some conditions - never assume you need a booster on all the time - always test at each location!

The guides below have been hand-picked to help further your education about the complicated topic of signal enhancing and utilizing cellular boosters.