As we reported on last week, Verizon has been dropping hints about "fireworks" this week, fueling rumors of newly revised Verizon plans with some exciting new features about to be announced.

And today - Verizon made it official, announcing the new plans will become available tomorrow, July 7th.

And while the new features are indeed pretty exciting, not all the news is good news.

Particularly for those who aren't heavy data users (the average Verizon customer uses just 2.7GB/mo!) - your monthly bill may be going up if you choose to opt-in to the new plan.

Verizon is our top recommended carrier for most RVers who are mobile. Verizon's nationwide coverage is the largest of the four major carriers, and they have no limitations on domestic roaming.

For more on the pros & cons of each cellular carrier for RVers: 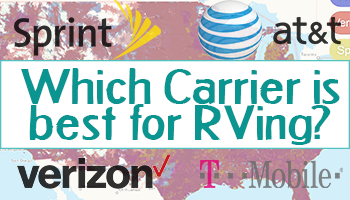 Here's everything you need to know about the new Verizon plan, and how it might apply to you:

But every one of the tiers is changing - getting more data included.

But the prices are going up across the board too - by as much as $10/mo.

Verizon justifies the price increase with their new slogan:

Overall, every plan size is seeing a reduction in the cost per GB, which is always a pleasant shift to see in the industry. But for those more focused on price than data, the price increase will be unpleasant news.

Here's the comparison of the old versus the new plans:

As in the past - Verizon will continue to offer plans beyond XXL for those who need even more data. All higher tiered are priced at a flat $4.50 per GB (a significant drop in price from the older plans at $7.50/GB).

Verizon also continues to offer data-only plan prices for customers who do not have any smartphones or voice line on their plan, but those prices are not changing. These data-only prices range from 2GB for $20/mo up through 100GB for $710/mo.

TIP: If you are seeking out a data-only plan, you will actually save money by having a phone on the line once you need more than 16GB for $90/mo. But if you need this much data, you can actually save a ton in the long run by getting a grandfathered Verizon unlimited plan line, which can cost as little as $45/mo for truly unlimited data.

On top of the data plan, customers also pay a line access fee, which have remained the same from the Old Verizon Plan:

As before you can have up to 10 different devices sharing your data plan, but now with the new Verizon plan "connected devices" such as smart watches do not count towards your ten device limit.

As an example, a XXL plan with 24GB of shared data a month, with 2 smartphones and a mobile hotspot (Jetpack) would be:

Then of course, there's taxes and regulatory fees on top of that. For those who qualify for employer or veteran discounts, don't forget to ask Verizon to apply those to your account too.

Here's a run down of the new features the Verizon is introducing with their new plans:

Even though Verizon is playing catch-up to the other carriers in rolling out many of these features, these are all welcome additions.

It's a Brand New Plan - You Have To Opt Into It

Like last year when Verizon launched the 'The Verizon Plan', this too is a brand new plan that is being dubbed The New Verizon Plan.

No customer will be automatically switched to it, and to obtain the all of the new features (and the price increase) you must agree to switch to the new plan.

If you like your existing plan, pricing, promotions or features - Verizon is allowing you to keep your current plan.

But new customers who sign up starting tomorrow will only be able to sign up for the new plan, and changes to your old plan (including changing your monthly data size) will force you into a new plan as well.

WARNING: If you have any old promotional plans, you will lose them by switching!

Of particular note, those holding on to any of these past promotional plans should very carefully consider if it makes sense to switch:

If you do decide to switch from any of these past offers, just remember you will never be able to get these old deals back.

Also new from Verizon is a referral program that rewards you for Tweeting and posting on Facebook encouraging your friends to sign up with a Verizon plan.

If someone signs up via your link, you can earn up to $100 per month.

The Verizon customer who shares the link earns $25 for one referral, $50 for two referrals, and $100 for three or more in a given month.

And each of the friends who sign up gets $50.

All payouts will be sent via Visa gift cards after the new account has been active for 45 days.

For more information on this new program, visit: www.verizonwireless.com/refer

TIP: If you don't have a friend to share the wealth with and you want $50 for signing up with Verizon, you can use our referral link to get the $50 credit. We appreciate the support in funding this site by using the referral. Thank you!