If you're holding on to a now retired AT&T Mobile Share Advantage plan, which was available from August 2016 to January 2018, changes are coming.

Beginning on July 1st, 2018, Mobile Share Advantage (MSA) Customers will see both their data and their plan prices increased.

There is no option to opt out of this change, unless you happen to have a contract remaining on these plans. .

How much additional cash should you expect to shell out for that extra data? AT&T has organized their price increases into tiers: 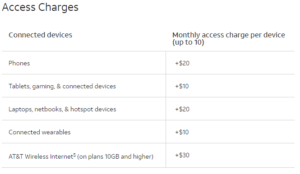 The Mobile Share Advantage plans offer shared pools of data available to a 'family' of devices.

On top of paying for a bucket of shared data, you pay a "line access charge" for every device sharing in the data.

This fee is $20/mo for smartphones and mobile hotspot devices, $30/month for a Wireless Internet (Homebase) device, and $10/mo for most other devices.

Taxes and fees are additional as well.

The involuntary plan price and data hike means deciding if the Mobile Share Advantage plan you will continue to meet your needs.

While a forced price increase is always jarring, the substantial data increase most of these plans are receiving may well worth the price.

But, if you're on a 30GB plan and never hit your 30GB cap, having your data increased to 60GB and being charged an extra $10 for that unused data may be a kick in the pants.

In the same scenario, a nomad that is constantly monitoring their usage to keep it under their 30GB cap may be thrilled with an inexpensive data doubling.

In comparison to the pricing schemes of the Mobile Share Flex plans, which rolled out in early January 2018, The Mobile Share Advantage Plans are still advantageous. Flex plans are only available in 1GB, 5GB, 10GB, or 20GB buckets.

Comparing Mobile Share's new pricing/data to AT&T's Unlimited Enhanced Plus plan takes a bit more thought. You'll need to consider how you use your data - not just how much data you use.

Unlimited Enhanced Plus plans include unlimited on device data, with 15GB of mobile hotspot data for $80 for a single line.

If you have an existing Advantage plan you can add or remove lines on that plan. However, you cannot change your data allotment. If you try to do so you will be forced onto one of the newer Flex plans.

Mobile Share Value 'Double Data' Plans - Before Mobile Share Advantage was introduced in August 2016, there was 'Mobile Share Value' plans. For some of 2014 and 2015, AT&T offered a 'double data deal' at no extra charge for customers who opted in. We know many members and readers who still hold onto these plans.

As far as we are aware, these also retired plans will remain untouched and will not be receiving an extra doubling of data or price increase at this time