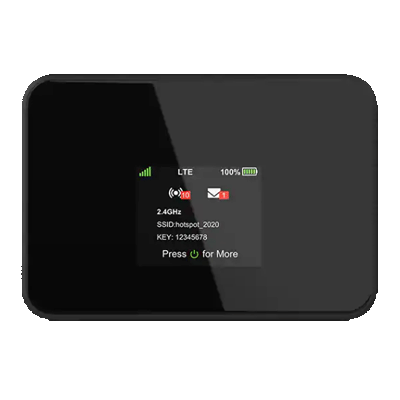 Cricket Wireless and AT&T Business are both offering a new entry-level mobile hotspot - the Turbo Hotspot 2 by Wingtech.

The Turbo Hotspot 2 is a basic hotspot device, with support for both 2.4 and 5GHz Wi-Fi.

As an entry-level device, it lacks some critical features for mobile internet road warriors - such as antenna ports for additional signal enhancing options. Also, the cellular bands supported by the hotspot are focused on the AT&T network - critical bands for other carriers are not supported which makes this device a poor choice for use on other networks.

We were unable to confirm for certain the LTE performance category for this hotspot, but we suspect is a Category-6 due to its support for the LTE carrier aggregation technology. This is a step up from most entry-level hotspots which are usually Category-4.  Category-6 allows for higher peak speeds thanks to LTE-Advanced carrier aggregation which allows the device to connect to more than one cellular band at once.

This new device replaces the Moxee Hotspot as Cricket's entry-level mobile hotspot and will be offered at the same $79.99 price.  We anticipate this device may also become available for consumer AT&T plans as well.

The Turbo Hotspot 2 is a step-up from the Moxee due to the faster modem, but it is still a poor choice for most nomads compared to alternatives such as the higher end Netgear Nighthawk.

We are honored to bring you industry news analyzed for RVers and cruisers .. for free .. without 3rd party advertising, sponsorships, or incentive to sell you 'stuff'.

5G Industry Update: 5G Routers, Hotspots & Antennas Are Here – But Should You Wait?

5G Industry Update: 5G Routers, Hotspots & Antennas Are Here – But Should You Wait?