PC Mag put it this way:

The carrier confirmed to PCMag that later this month, hotspot data allowances will start to apply to subscribers on the carrier's fastest 5G network. This change will apply both to people on existing plans and those on the carrier's new plans, the carrier said.

Ars went into more depth and noted that even older plans where customers could pay an extra monthly fee for 5G UW would be capped as well:

Beyond Unlimited isn't the only package affected by the hotspot change. For any other affected plan, Verizon told us that "people on plans with 5G Ultra Wideband mobile hotspot will transition to having an allowance based on their plan." Thus, whatever limit you have on 4G hotspot usage will soon apply to all 4G and 5G hotspot usage combined, without any separate unlimited allowance for millimeter-wave hotspot usage.

So the result is disappointing - an attractive unlimited mobile hotspot feature is being ended right before 5G UW starts to become much more useful. 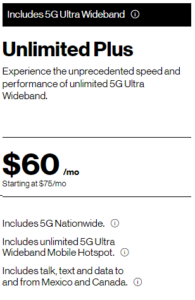 This is likely an oversight and we expect that Verizon will probably change the terms of prepaid plans to eliminate unlimited high-speed mobile hotspot before Verizon launches its C-Band network on January 19th, 2022.