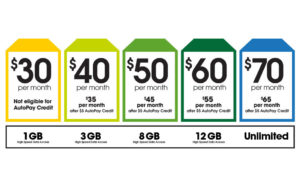 (1/25/17) - Data Plan Allotment Increases: AT&T's Cricket Wireless just announced that beginning January 27, 2017, it will be increasing the amount of high speed data included on its $60 plan. The plan will now offer 12GB of high speed data (previously 10GB). Cricket also reports that it has made their October 8GB promotion on the $50 plan permanent (prior to October the plan was 5GB/$50). There is no change to the $70 unlimited data Cricket plan - including the caveat that hotspotting is prohibited on the plan. On all other plans, mobile hotspot / tethering may be added to the base price for $10/month. The plans mentioned here are all still eligible for a $5/month auto-pay discount. For more details on the plans themselves, read on below.

Like MetroPCS, they typically include 5 GB for $50. Under this promotion, existing Cricket Wireless customers and new customers can activate or switch to the $50/plan and get 8GB of high speed data monthly, which will remain grandfathered in as long as the account remains active.

Cricket Wireless announced on 1/26/17 that this promotion will become the typical offering for the $50 plan.

Cricket Wireless also includes use to and from Canada and Mexico as part of their plans.

Cricket offers a $5/month savings when auto-pay is setup, and additional lines of service are discounted.

Some striking differences however from the MetroPCS deal to be aware of on Cricket Wireless include:

With this offer, Cricket Wireless remains a competitive choice for access to the AT&T network for a mobile RVers.  AT&T's network is currently ranked second to Verizon, and is an ideal second carrier to have onboard. For comparison, AT&T's own GoPhone prepaid plans offers a $60/month plan with only 6GB of data (but at full LTE speeds).

Cricket Wireless also offers a $60/month plan that includes , and an unlimited data plan for $70/month (which, much to the chagrin of mobile internet consumers, has no option to add on mobile hotspot use).