This is a developing story - we will update this story as information is received and confirmed below.  Last Update: 28 February, 2022.

Several Mobile Internet Resource Center MIA members today received cancellation notices for their AT&T prepaid accounts.  The email warned that their current device will "stop working any day now" and that the account would be canceled on April first if the device wasn't upgraded.

This notification is likely related to AT&T's plan to shut down its 3G network tomorrow (February 22nd).

The problem is that the people receiving this notice are using LTE devices, including those listed on AT&T's whitelist.  This is likely a mistake by AT&T.

Here is a copy of the email: 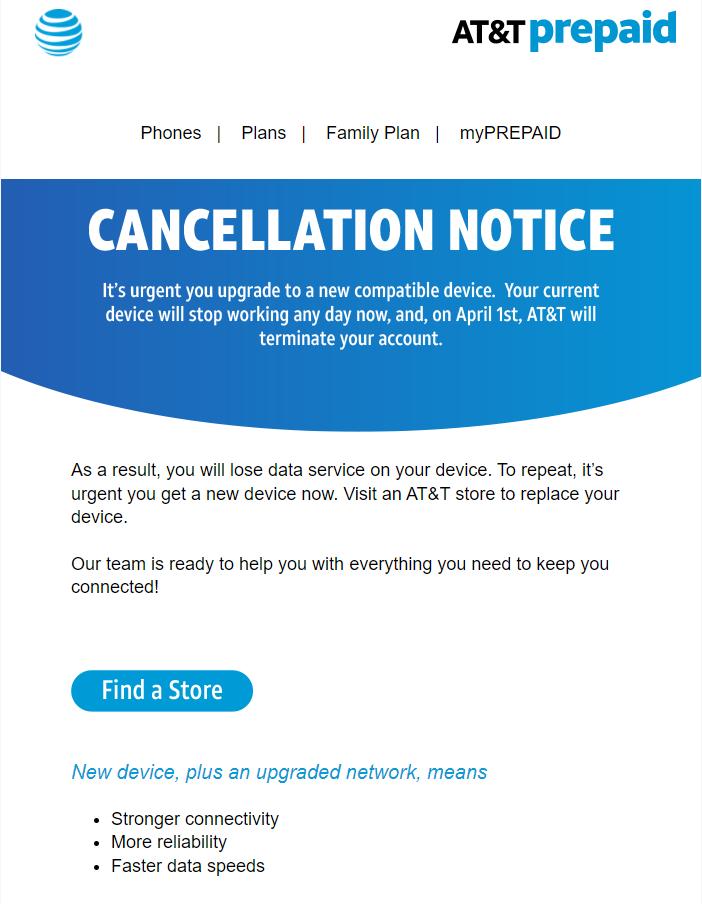 So far it appears that only AT&T prepaid customers with data-only lines are receiving the warning. Although AT&T seemingly doesn't want to publically admit it, these notices were almost certainly a mistake.

Some customers who received the warning are using the AT&T MR1100 Netgear Nighthawk mobile hotspot device, which is both on AT&T's whitelist and also currently for sale on AT&T's website. Postpaid customers who use the same device did not receive a similar cancellation letter.

It does not make any sense for AT&T to tell customers that this device must be upgraded or it will stop working.

The same goes for other reports received from our members who are using other modern equipment that is not affected by the 3G shutdown.

At the lower-level customer service level, AT&T responses have been all over the map, which has only added to the confusion.

However, an official AT&T spokesperson gave us this statement when we inquired about the situation and cited the Netgear Nighthawk in particular:

"Some models of the Netgear Nighthawk MR1100 are impacted by the 3G network shutdown.  Out of an abundance of caution and in an effort to be transparent, we notified all customers with models that may be affected. Customers who want to verify the compatibility of their device should call us or visit a store so that we can verify the IMEI."

The "some models" that AT&T refers to are likely devices built for and sold in foreign markets.  We've seen some customer support forum responses identify that models built for the European and Australian markets may not work on AT&T's network with the 3G shutdown.  But these models are rarely found in North America.

When pressed, AT&T also further gave us a statement:

"Some models of the Netgear Nighthawk MR1100 are impacted by the 3G network shutdown.  Out of an abundance of caution and in an effort to be transparent, we notified all customers with models that may be affected. Customers who want to verify the compatibility of their device should call us or visit a store so that we can verify the IMEI."

We are maintaining that this cancellation e-mail was sent out in error, and AT&T compatible LTE devices will remain operational and accounts will not be cancelled.

The vast majority of 4G/LTE data devices, whether they are mobile hotspots or routers, will continue to work now that the 3G network is shutting down.  If your device does have problems, then you can replace it with a newer device or have the IMEI checked by AT&T for compatibility.