AT&T is calling this the first "5G Evolution" capable hotspot, and it is indeed very technologically impressive.

The Nighthawk is a major jump beyond AT&T's current flagship Unite Explore mobile hotspot in raw LTE capability, but don't get too excited just yet: on AT&T's existing network you will only actually see a speed advantage in just Austin and Cincinnati.

But if future-proofing is your goal - the Nighthawk looks to be the new king in town.

November 10 update - we have purchased a unit and will begin testing it head to head against other AT&T hotspot options. Our field testing results are available to our members here: Cellular Equipment Field Testing Results – Netgear Modems / USB730 (Late 2017)

Some of the key features of the Nighthawk include:

But - you will only see the benefits if you are somewhere the towers have been upgraded to support these technologies. 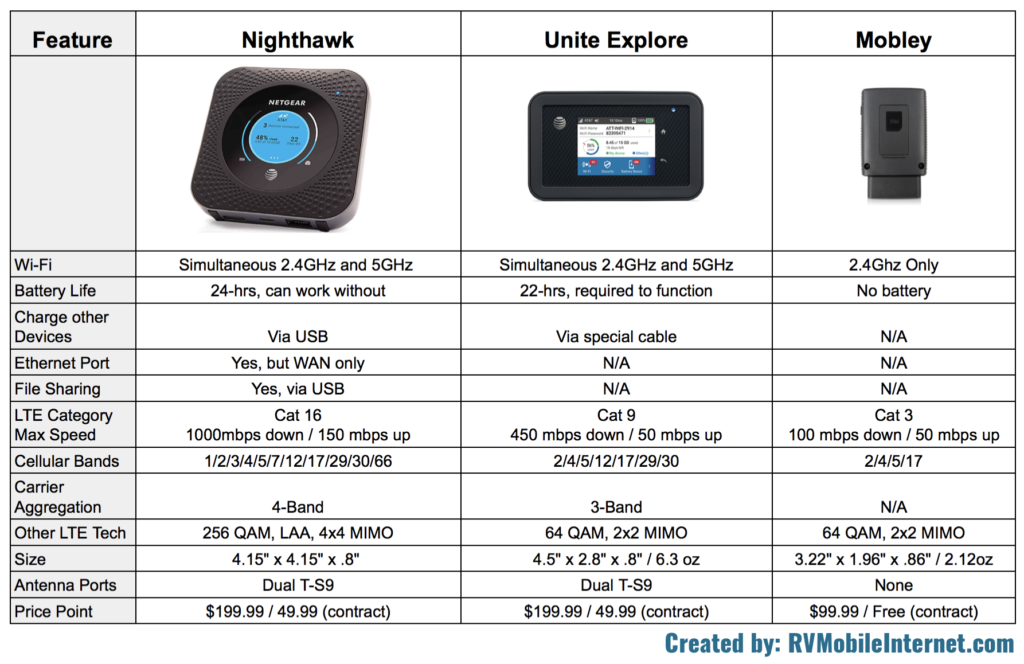 Read this article to understand what these technologies are:
The Race to Gigabit LTE (And Why Things Seem To Actually Be Getting Slower)

Also check our Member Guide with our 'Future of LTE' video :
Selecting a LTE Mobile Hotspot or Modem (MiFi / Jetpack)

It also still supports falling back to AT&T's 3G network.

Here are some additional tidbits I've been able to learn, particularly by reading the manual of the Australian Nighthawk version which has already been out for a while:

Overall - the Nighthawk seems to be a pretty impressive beast.

The Nighthawk has the same dual TS9-style antenna ports as the Unite Explore, and you should be able to improve reception and speeds with an external antenna.

Unless you are in Austin or Cincinnati and can test both with an antenna and without, it might be hard to tell what is actually going on inside.

The Nighthawk is not designed to be a go-anywhere device like the Unite Explore.

It is not water resistant like the Unite Explore is, it is physically much larger, and it does not appear to be nearly as shock-proof and rugged.

If you have a Unite Explore and are happy with it (or you just acquired on to get in under the wire to grandfather in an unlimited data plan) - it will be a long time before the Nighthawk's performance advantages will likely tempt you to upgrade.

Gigabit LTE is the culmination of traditional LTE - squeezing every last possible ounce of performance out of current technologies and standards.

The performance jump between basic LTE and gigabit  LTE is substantial enough that AT&T is starting to call these upgraded tower deployments "5G Evolution" - the same way AT&T labeled its 3G technology HSPA+ network "4G" before it launched its real 4G/LTE network to compete with Verizon.

But despite the marketing - AT&T's "5G Evolution" is NOT real 5G, which is still another two years away.

Right now AT&T has only just begun to deploy "5G Evolution" technologies, and is claiming at the moment that the Nighthawk will only rise above other devices in VERY limited markets, saying:

If you are anywhere else in the country, you will have a while to wait.

Meanwhile - T-Mobile, Verizon, and even Sprint are all busy rolling out many of the same LTE-Advanced network upgrades. But none of the others have the audacity to label them "5G".

We've been tracking the customer notices and internal memos that AT&T has been sending out over the past two weeks saying that mobile hotspots will soon "no longer eligible" to be added to AT&T Unlimited plans, including a deadline for customers needing to have devices active by October 27th to have a hotspot grandfathered in with the current essentially fully unlimited service.

So...  How does the Nighthawk fit in?

Will it be available with unlimited data, or is AT&T going to bring back limited data plans for hotspot customers?

Honestly - it is not at all clear right now what is going on, and it seems at time that AT&T might not even be sure.

The Nighthawk was clearly designed for limited data plans - with a focus on "Data Offloading" to minimize cellular usage, and guidance on the control panel to let you know if you are currently on track for staying under your monthly limit.

Yet AT&T's current Unlimited Plus plan lets you add a hotspot line to your Unlimited Plus plan for as little as $20/mo - and you get fully uncapped usage, subject only to AT&T's typical "network management" potential speed drop after 22GB of usage in a month, but only on congested towers.

We know many people who have embraced AT&T hotspots because of this amazing plan, and who are regularly using 100's of gigabytes a month.

We will be watching closely to see if AT&T rolls out new plans to go along with the Nighthawk, or if AT&T ends up backing away from its plans to make hotspots ineligible for being added as unlimited lines. We anticipate potentially seeing new plan changes or announcements coming soon from the carrier.

We will also be checking to make sure that customers with current unlimited hotspot lines will be able to upgrade to the Nighthawk while keeping their grandfathered service.

Nighthawk, Worth Jumping On?

The regular price of the Nighthawk on AT&T is $199 without a contract, or $99 if you lock into a two year commitment to keep a service plan active.

Through December 7th AT&T has an introductory price of $49 for the in-contract price.

This pricing makes the Nighthawk an attractive alternative to the Unite Explore (which is priced the same), though we expect it will be at least a year before AT&T's network has been upgraded widely enough to allow the Nighthawk's performance potential to outshine its little brother.

In other words - if you have a Unite Explore and are happy with it, you shouldn't be in a rush to upgrade.

But if you just bought a Unite Explore (and are still within AT&T's 14-day return window and have your original packaging) - you will have to weigh the tradeoffs to see if jumping through the hoops to exchange or return your device is worthwhile.

TIP: Nighthawk on Other Carriers

AT&T has a "limited time" exclusive in the USA on selling the Nighthawk - but it may become available unlocked and even with versions on other carriers once that exclusive expires.

The current Nighthawk hotspot (once unlocked) should be a great match for T-Mobile, with support for all the key T-Mobile technologies and LTE bands other than the new 600MHz LTE Band 71.

Unfortunately - the AT&T Nighthawk lacks support for any of Sprint's LTE bands, and it is missing support for Verizon's primary LTE Band 13.