TPO Mobile, also known as The People’s Operator, is a reseller that originally started in the UK in 2012 and launched service in the US in 2015. TPO Mobile began offering their service over the Sprint network, but have since added T-Mobile to their coverage.

Of interest to RVers looking to do some on device streaming is TPO Mobile's new Infinity unlimited data plan. This plan includes unlimited talk, text and data, with the first 50GB at 4G LTE speeds.

The best part? This plan is priced at $54.99 ($59.99 without auto-pay service) for a limited time -reportedly until October 31st, 2016. If the plan is purchaed during this promotional period, this price will be 'grandfathered' in as long as your account remains in good standing. This price point is excellent in comparison to that of Sprint's unlimited tablet plan and the unlimited prepaid offerings from competing Sprint based resellers. 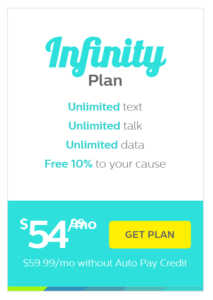 There are some caveats to TPO Mobile's Infinity plan:

TPO Mobile plans do come with an added bonus: charity! TPO Mobile donates 10% of what you pay them to a charitable cause of your choice, in addition to 25% of their profits being allocated to their own charitable TPO foundation.

As with any MVNO or reseller, remember that the offerings put forth by these companies are on a 'no contract' basis. Caution is advised on relying on such offerings, as the 'no contract' clause works both ways.