Home » News » News Analysis
(11/1/18 UPDATE): Sprint has increased the high-speed hotspot data limits on the Plus and Premium plans from:

On August 31, 2018, Sprint rolled out a new tier of cellular service called "Unlimited Premium."  This plan is a new addition to the existing Unlimited Basic and Unlimited Plus plans which came out in mid-July 2018.

The Unlimited Premium plan is advertised as a "VIP experience" and it does include a ton of features for an extra $20/month per line over the Unlimited Plus.  That $20 gets you the following additional features:

The plan costs $90/month with Autopay for one line.  According to Sprint, all these services would cost at least $130 if purchased individually. So, by their calculation, customers on this plan would get $40/month in savings, or nearly $500/year.

Video Verizon of this Story:

This is a smartphone-only plan, so those who want other connected devices, such as a mobile hotspot or tablet, will need a separate plan for those.

Sprint Mix-and-Match: It appears Sprint has quietly added the option to mix-and-match its three unlimited plan options in one plan, similar to Verizon.  For example, you could get 2 lines of Unlimited Premium for $160 and two lines of Unlimited Plus (the mid-tier option) for only another $40/month.

Sprint is also offering a $10/month per-line discount for those that bring their own phone or buy a new one at full price.  That makes the first line $80/month with autopay, the second $70/month and each additional line $40/month.

Sprint's new "VIP" level Unlimited Premium plan does pack in a ton of useful and compelling features for a price that is very competitive.

The addition of Amazon Prime is a great feature - one that not only gives a large video streaming library, but also free 2-day shipping and the other benefits of Prime service.

The chart below compares the "top tier" plans for each of the four major carriers: 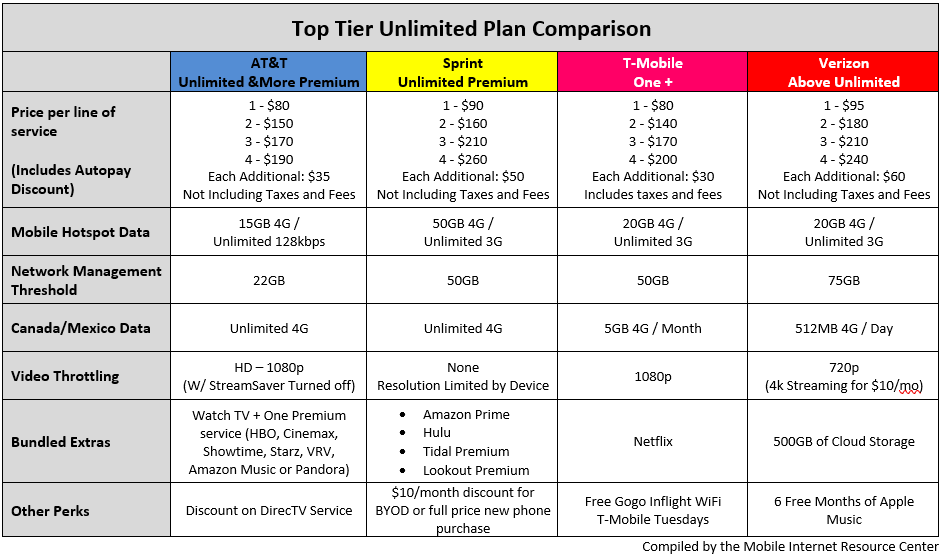 Depending on your individual needs and tastes, Sprints new offer could be a much better value than the competition with a healthy 50GB of high speed mobile hotspot data, no video throttling (opening up 4k on compatible devices) and Amazon Prime as a fantastic and useful bundled extra.

The single-line price is very competitive, but this plan doesn't scale as well for multiple lines - For example, for four lines the total cost is $70 more per month than AT&T's top-tier plan.

As is the case with any Sprint-based plan, prospective RVers, Cruisers, and nomads should consider if Sprint's coverage map - the smallest of the four carriers - will work for planned travels.

For more on the four carriers and how they stack up:

The Four Carriers for Nomads

It's interesting that Sprint came out with this plan on the heels of T-Mobile retiring their top-tier One + International option.  Since Sprint and T-Mobile announced they planned to merge, Sprint has slowly changed its offerings to more closely match those from T-Mobile's - until now.

While we don't have any inside information, it would not surprise us if T-Mobile came out with a new top-tier option.

Regardless, this new Sprint plan will definitely give the competition something to think about.