The service is very similar to Comcast's Xfinity Mobile service, with both options running on Verizon's network behind the scenes.

Spectrum Mobile service is only available to Spectrum home internet customers, but for those that qualify it is potentially an affordable way to add access to Verizon's network to your connectivity arsenal.

View our Video Edition of this Story:

Back in 2011 Charter and Comcast were part of a cable industry consortium that sold billions of dollars of cellular spectrum to Verizon, but as part of the deal the cable companies retained rights to eventually launch their own cellular services using Verizon's network behind the scenes.

This deal is what enables the big cable companies  to buy service from Verizon at wholesale prices, allowing Spectrum Mobile to launch with competitive prices on Verizon's network - including providing access to Verizon's roaming partners.

Without this deal - launching with nationwide coverage would have been impossible.

Like Xfinity Mobile, you can have up to five total lines (based on the customer's credit rating), but new Spectrum home internet customers will be limited to 2 lines for the first 30 days.

December 2018 Update: Customers must purchase a new phone through Spectrum Mobile to sign up or trade-in an old phone to receive a new one at a discount.  Spectrum initially started with only a small number of Android options are available, but have expanded to include most iPhone models.

May 2019 Update: Spectrum Mobile customers can bring their own Verizon-compatible Apple or Samsung without needing to purchase a new device.  Phones from other makers are not currently supported.

For Spectrum Internet Customers Only

The most important limitation is that Spectrum Mobile is only available to Spectrum home internet customers.

However, if you cancel Spectrum home internet service in the future, you can keep the Spectrum Mobile lines, with some limitations:

For those who maintain a home base in a Spectrum area, and who subscribe to their home internet service and travel occasionally, then this can be a worthwhile plan.  However, until they roll out BYOD, you'll have to purchase a phone from them.

For those transitioning to full-time travel, the extra $20 per line access fee for not having home internet service makes these plans unattractive compared to other available options.

5GB of high-speed mobile hotspot use for $45/month is not great, especially since the 5GB counts toward the 20GB network management threshold.

If you have both Spectrum and Xfinity available at your home, you may want to consider the mobile aspect when deciding on a home internet service. Spectrum Mobile is very similar to Xfinity's service but there are some differences: 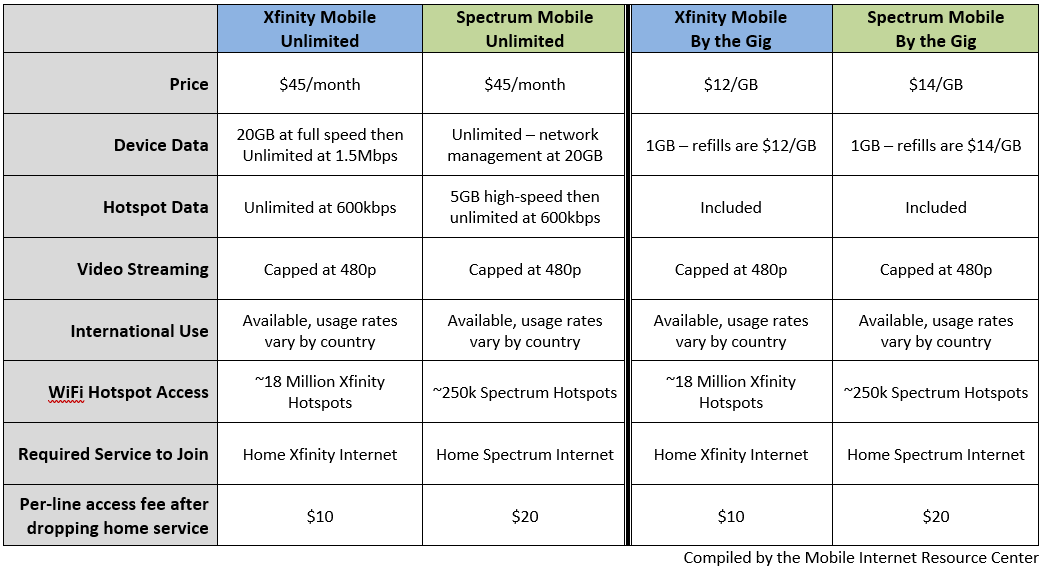 Potential customers will need to look at the whole package when evaluating these offers as well as compare with other available data plan options, but in the right circumstance, Spectrum Mobile could be a solid choice for a part-time nomad with a home base served by Spectrum cable.