UPDATE: The new AT&T plans went live this morning (June 28th) - and we've been digging deep into the fine print.

Our original story continues below...

Verizon isn't the only carrier tacking additional superlatives onto its "unlimited" plans.

Here is what AT&T has to say about these new plans:

"We were the first wireless provider to pair entertainment and unlimited data. That’s because unlimited is pretty limited without entertainment. So now we’re taking it even further to give you more for your thing."

And while these plans now come bundled with AT&T's new 30-channel "Watch TV" live streaming service (presumably this is for your "thing"), they actually have nothing new to offer mobile internet users more interested in an "Actually Unlimited" plan with ample shareable data.

Particularly if you have an older AT&T plan that has any truly unlimited hotspot lines on it, do NOT be tempted to switch to these new AT&T plans!

But if you instead are looking for a live TV and internet bundle - the "&More" just might be appealing to you.

NOTE: Not a typo, the official AT&T way to write the new plan names is "&More" without a space. Who comes up with the names for these plans?!?!

The Unlimited &More and &More Premium plans are only slightly changed from the Unlimited Enhanced Plus and Enhanced Choice plans - though they are slightly more expensive for the basic &More plan compared to the Enhanced Choice, and the price for additional lines beyond four has gone up across the board .

This choice of perk replaces the free HBO option that had been available with many AT&T plans in the past. 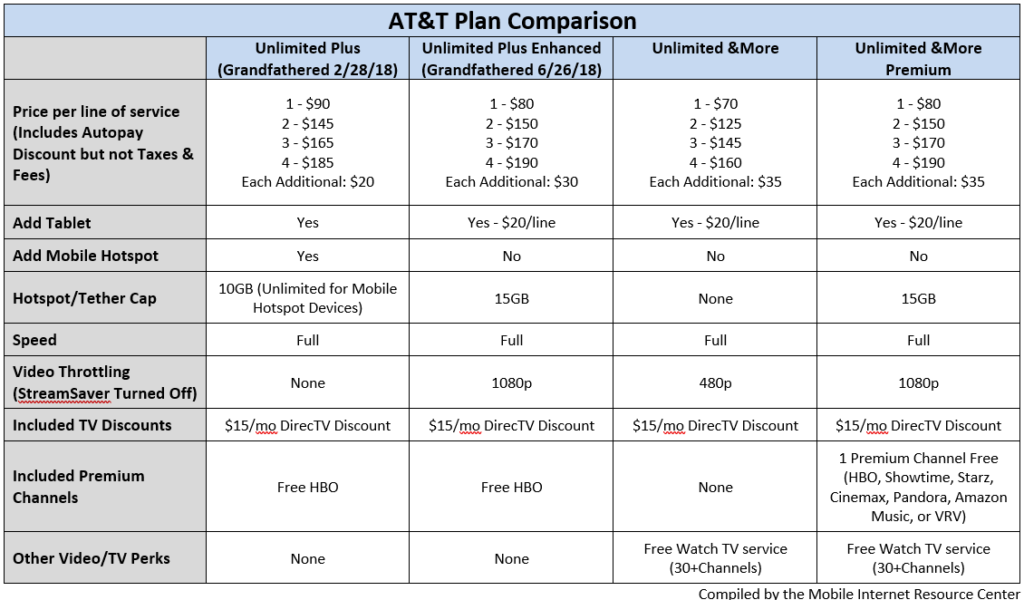 BTW - if "Watch TV" is not enough channels for you, AT&T customers on the new plans remain eligible for a $15/mo discount on DirecTV or DirecTV Now service.

AT&T's Watch TV - Available to Anyone

Now that AT&T owns both DirecTV and Time Warner, the company's focus is very media centric.

AT&T's new Watch TV service is launching with 30+ live channels - with more coming. The focus of course is channels that AT&T now owns.

In the near future various Viacom channels (like Comedy Central) will be added to the mix as well - but the traditional national networks and sports channels are unlikely to be included any time soon.

Channels will be available live, and some shows and movies will also be available on demand. If you miss a scheduled broadcast time, you will be able to rewind up to 72 hours to catch up on what you've missed.

But presumably, commercials will not be skippable.

The Watch TV service will debut with an iOS and Android smartphone app, and will also be watchable via web browser and via various streaming devices.

The new Watch TV service is debuting bundled with the AT&T "&More" plans, but it is also available for anyone to subscribe to for $15/mo - even if you are not otherwise an AT&T customer.

TIP: If you have an older AT&T plan and are interested in Watch TV, you might find it is actually cheaper overall to add Watch TV on to your old plan for $15/mo rather than upgrade to the new more expensive bundled plan.

The Age of Bundles is Upon Us

With Network Neutrality essentially dead and media mega-mergers ramping up, what we are seeing with AT&T's latest plans is likely to be just the beginning of TV, Internet, and Cellular growing increasingly tied together.

Verizon has made no secret of its own ambitions in this space, and T-Mobile has said that it plans to soon bring the same sort of disruptive energy to the TV streaming world it brought to cellular.

A lot of these ambitions come down to advertising.

If carriers can monitor what you watch and where you surf they can build up profiles that become extremely valuable for targeting you. If you thought ads that followed you around web sites were annoying, just wait until they start popping up on top of the shows you watch too.