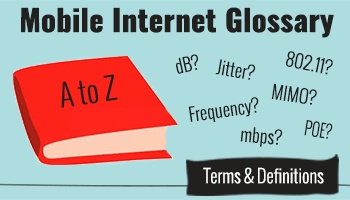 Before you get frustrated wondering why you might need a POE to power your CPE to get remote 802.11g when you’d really rather have more dB on your LTE – check our glossary below.

You'll also find these terms underlined through-out our guides & articles - just hover/click the word, and the definition will appear.