Marine routers with Wi-Fi repeating and cellular support by Island Consulting. The company has since gone out of business.
Released: August 2015
$399-$799
Glomex weBBoat Marine LTE Routers 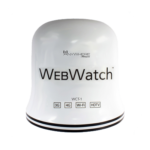